An extravagant event was organized by Tsusho Jamjoom Company on January 2nd, 2020 in Crowne Plaza Jeddah hotel, with a distinguished presence of elite transportation customers in Saudi Arabia. The company officially announced Hino participation in first ever Dakar Rally under the name of Team Sugawara in Saudi Arabia.

At the start of the ceremony, Mr. Tsutomo Mori, CEO of Tsusho Jamjoom Trading Company, welcomed the customers and Mr. Teruhito Sugawara, Director of the Hino Sugawara Team.

He informed that Hino started its participation in the Dakar Rally since 1991 with the Sugawara team and winning for the last 10 years under 10 litres capacity engines category and hope that Hino will repeat its great performance on Saudi soil. He also stated that Hino trucks are made in Japan and very popular in Japan local market. He is confident that Saudi customers will also enjoying great Hino trucks as reliable business partners. 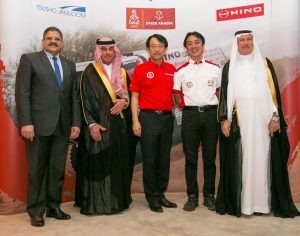 On the other hand, Mr. Sassi, General Manager of the Automotive Sector at TTC (Toyota Tsusho Company), expressing his happiness that he was present to participate in the historical event of launching the Dakar Rally in the Kingdom of Saudi Arabia. He said “In the context of achieving the goals of the 2030 vision, the Kingdom is witnessing a great openness towards the world, and there is a large influx of investments and major changes in the social and economic future. He added: The Kingdom means a lot to us and hence established the Tsusho Jamjoom Trading Company to serve the local transport industry with great technological advanced Hino Trucks.On this occasion, Mr. Shahab Anwar, General Manager, Sales and Marketing TJT delivered detailed presentation, highlighted TJT formation, explained Hino product range and its suitability to the local market. He also elaborates HINO Q.D.R (Quality, Durability and Liability) philosophy and showed great resolve to further strengthen Total Support for Hino Trucks.

Dr. Ghazi Jamjoom, Vice Chairman of the Board of Directors of Tsusho Jamjoom Trading Company while thanking the participants for their great attendance also stated the strategic goals of the company based on “customers as business partner”. He said that the company will use all its resources to work towards achieving this performance criteria and soon transporters can notice Hino presence in KSA.

The valued customers got a great chance to mingle with Mr. Teruhito Sugawara and take photos and selfies with him. Customers wished Team Sugawara a success in this year Dakar Rally 2020.It should be noted that the Tsusho Jamjoom Trading Company (TJT) is the Wholeseller and Retailer for Hino Trucks in the Kingdom. 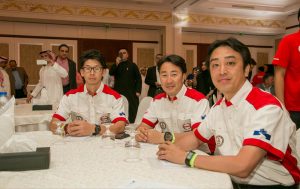